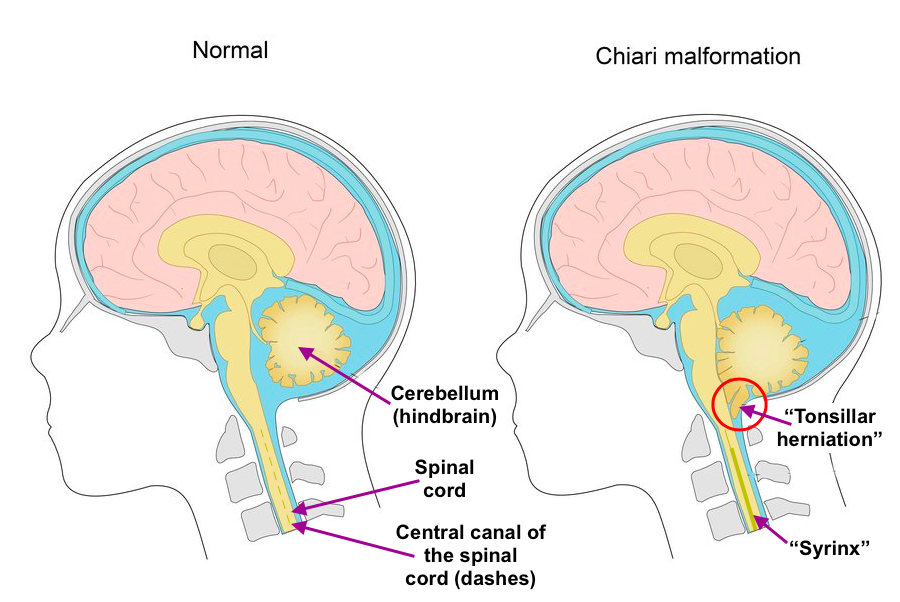 This malformation is identified (radiologically) by the patient’s hindbrain structure known as the cerebellum (see left image, above) herniating downwards towards the cervical spine. At this point, the ‘foramen magnum’, which is the bony window between the base of the skull and the cervical spinal canal, gets fairly tightly occupied by the lower part of the cerebellum known as its “tonsils” (see right image, above). Here, the pulsatile impaction/wedging of the tonsils, if it is severe enough, causes symptoms (see below) by physical obstruction at a brain tissue and cerebrospinal fluid (CSF) flow level, almost like a ball-valve phenomenon.

There are four types of Chiari malformations, Types I – IV. The Chiari Type I malformation is the most common one seen in adolescents and adults, and it is the version depicted and described above, and shown in images below. [At the very bottom of this page, for interest, I have included an MRI image of an Arnold Chiari Type II (aka “Chiari 2”, etc.) patient that I saw in my Rooms]. It can be associated with one or more craniospinal bone formation abnormalities (for further details, see the nice Chiari article PDF from the American Associate of Neurological Surgeons/AANS, by clicking here).

Why does a Chiari I malformation occur?

Birth-related (‘congenital’) issue, i.e., the patient is born with some anomaly in this location: Typically, a slightly smaller-than-normal posterior skull cavity (posterior fossa) during foetal development. The other type of Chiari I, i.e., an “acquired Chiari I”, is when overdrainage of cerebral spinal fluid (CSF) from the spinal region causes a pressure gradient that, in effect (like a sink), draws the posterior part of the brain downwards along the pathway of least resistance, hence causing an impaction the same as that illustrated above. The acquired Chiari condition can arise from lumbar drains and shunts from surgery, or from traumatic injuries to the spinal nerve root sleeves where there is a chronic leakage of CSF from the spine, and the brain “sags” downwards. The acquired Chiari requires special studies to identify (see below).

How does Chiari I present in terms of symptoms?

Most people with Chiari I malformations don’t have any symptoms, and don’t know they have the malformation. Some, however, do experience symptoms, especially in late adolescence or even more commonly in adulthood. The classic triad of symptoms are:

Other symptoms might include changes in balance, coordination, and weakness in the limbs. Disturbance of swallowing and respiration (including sleep apnoea) would be uncommon but red flags.

What are its consequences, if it’s symptomatic and left untreated?

The neurological symptoms and signs can progress; gradual neurological deterioration. It can be life-threatening in time. The development of a “syrinx” (S, below) as shown in the images below means that the Chiari malformation (red bracket, below; here the tonsils have descended to the level of the top of C2 vertebra)  is causing enough physical obstruction so as to impair the normal passage/flow of CSF in and around the brainstem and spinal cord regions. This leads to a dilatation of the thin central canal of the spinal cord (HYDROMYELIA) and acculmulation of interstitial fluid in the substance of the spinal cord (SYRINGOMYELIA; S, below). Clinically, this can cause limb and torso sensory disturbance, limb weakness and incoordination, and clinical features of a “MYELOPATHY“. 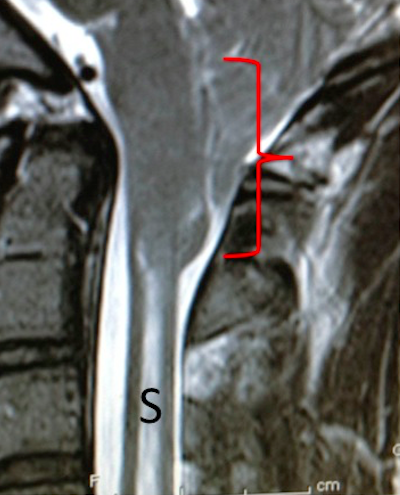 What imaging is diagnostic for Chiari I malformations?

I usually just order a standard MRI of the brain and spinal cord, from the brainstem down to the thoracolumbar junction. This should show the extent of the Chiari malformation and the presence of a syrinx if there is one!

If I am looking for a CSF leak along the spine (part of a Spontaneous Intracranial Hypotension/SIH syndrome, with or without an acquired Chiari I), I ask the radiologists to do one or more of the following:

How are Chiari I malformations treated?

If they are symptomatic and radiologically significant and/or progressing, a stereotactic Chiari “posterior fossa” decompression with C1 laminectomy and duraplasty are usually what is required. The incision and bone work are illustrated here, an image from the American Association of Neurological Surgeons/AANS (for further details, see the nice Chiari article PDF from the AANS, by clicking here). 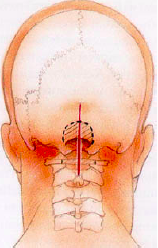 The image below, left, pre-operative, and below right, post-operative, following surgical Chiari decompression. Alot more room for the posterior fossa structures after the operation! 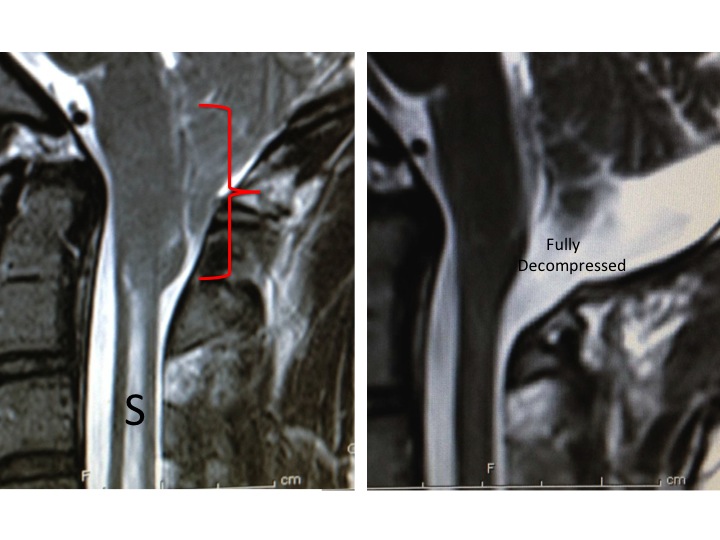 The syrinx (below left, pre-op, red arrows) should resolve after successful decompression (below right, post-op, green arrows), but sometimes it can persist to some extent. The neurological symptoms should improve.