Click any of the images below for a larger view.

Please also visit our MULTIMEDIA page for some Magazine/Press articles about some of Dr Khurana’s cavernoma patients.

A cavernous malformation, also known as a cavernous hemangioma or ‘cavernoma’, is an abnormal vascular entity (or “lesion”) made up of many small compartments (lobules) like a bunch of small berries, or a mulberry. Here’s an image of a cavernoma microsurgically excised by Dr Khurana: 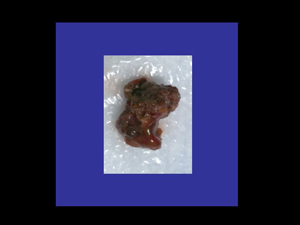 These microcomparments contain blood (hemorrhagic) products in different stages of evolution. The “sinusoidal” compartments are enclosed by abnormally thin and quite fragile endothelialized walls. There is almost always a venous angioma associated with a cavernoma.

Most cavernomas are found in the larger (supratentorial) parts of the brain hemispheres. Here’s an example of a periventricular cavernoma (red dotted circle) removed by Dr Khurana (post-operative image lower right in the panel below): 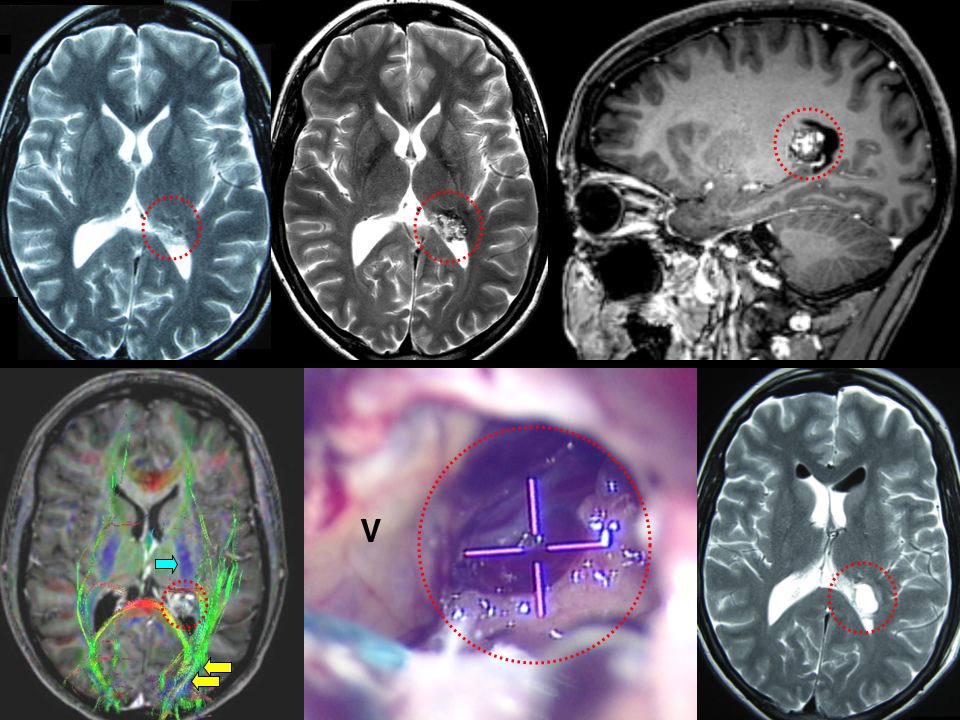 Here’s another example of a cavernoma (red dotted circle) excised by Dr Khurana from the speech/language area of the patient (post-operative image lower right in the panel below): 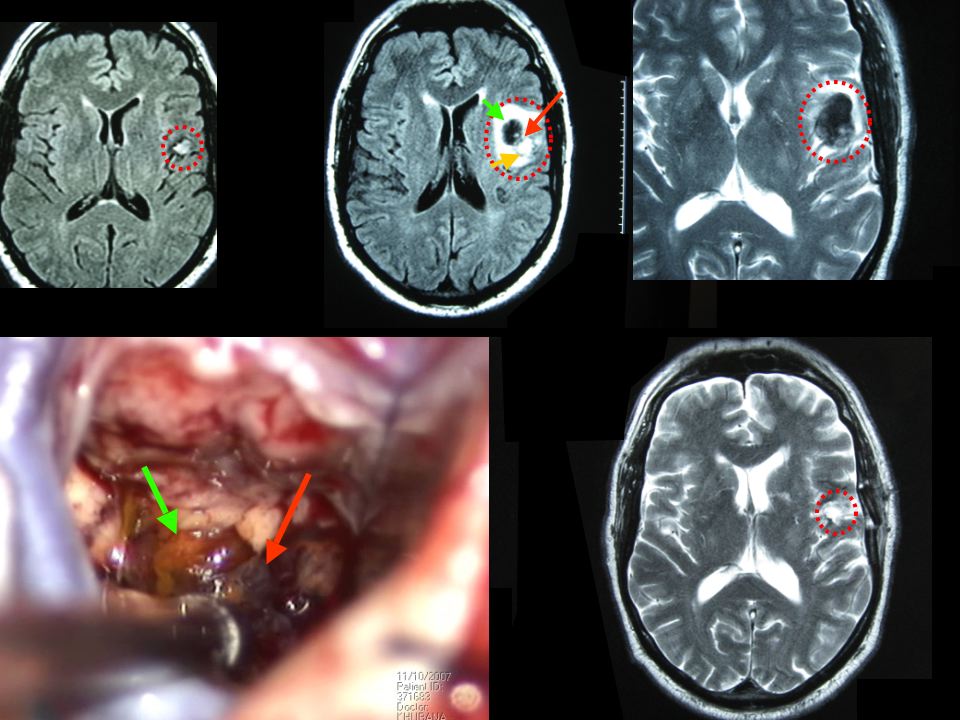 One in 4 or 5 (i.e., 20-25% of all cavernomas) are found in the hindbrain (posterior fossa; infratentorial), especially in the pons region of the brainstem. The image collage below shows a cavernoma in the brainstem before and after successful microsurgery by Dr Khurana (post-operative image lower right – F & G – in the panel below): 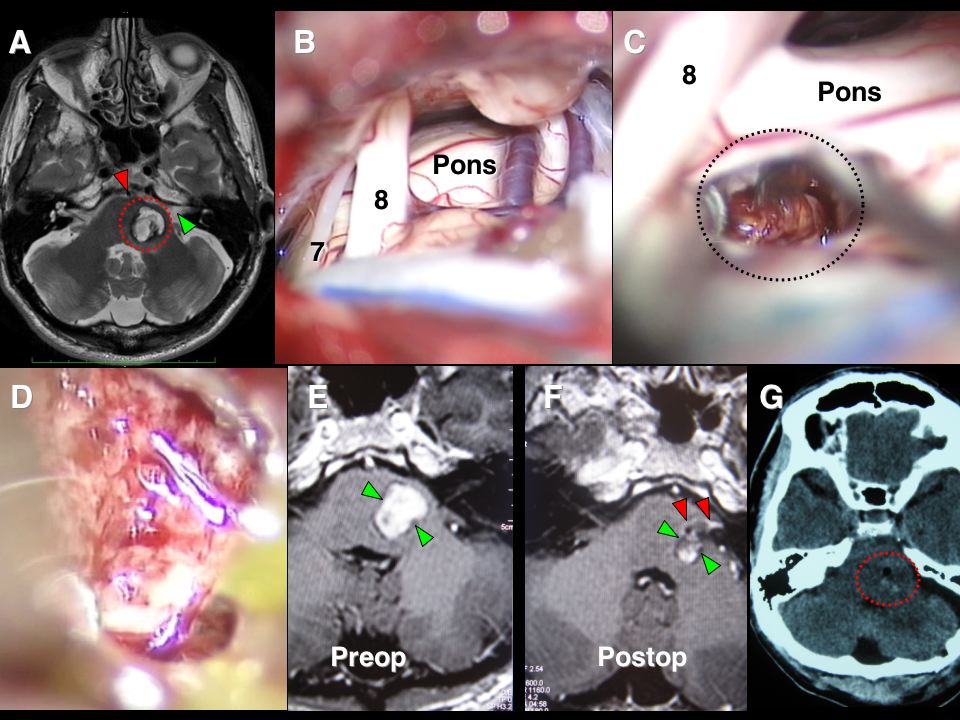 Much less commonly a cavernoma may be found in the spinal cord (but this may be more likely to occur in patients with a family history of cavernous malformations). The image collage below shows a cavernoma in the uppermost part of the cervical spinal cord before and after successful microsurgery by Dr Khurana (post-operative images lower right – D – in the panel below): 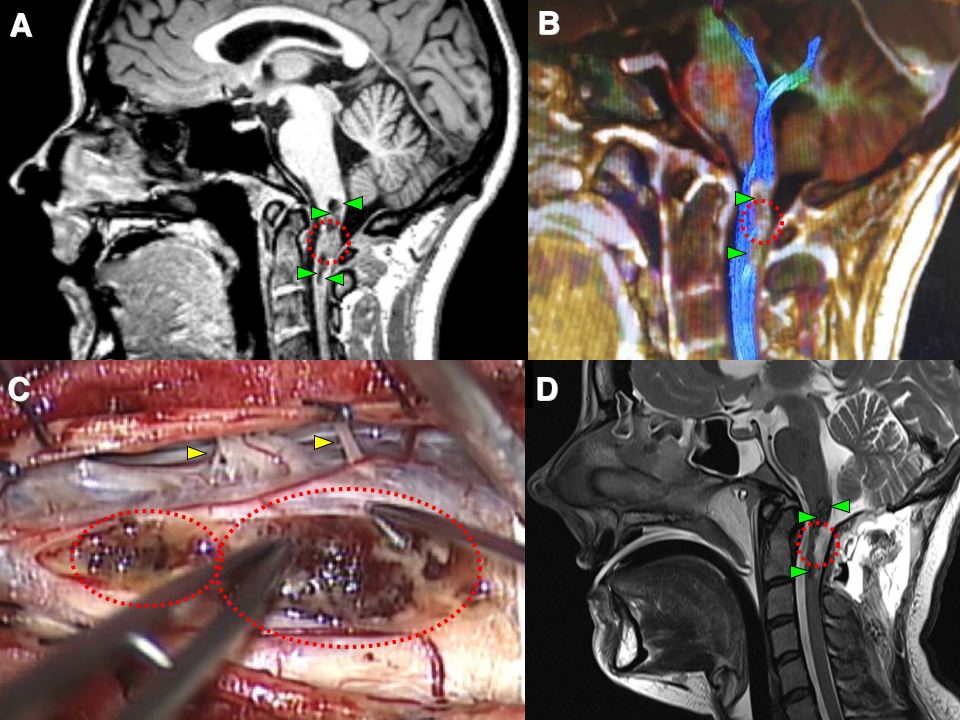 They are not very common. Their prevalence (presence at any given time) in the population is probably somewhere between 0.1 – 0.5% (i.e., 1 in 200 to 1 in 1000 people in the general population); they are about as common as brain arteriovenous malformations (AVM), and far less common than brain aneurysms.

Cavernomas occur sporadically (spontaneously in a non-inherited manner) in the majority of cases, but in some cases may demonstrate inheritance (familial; i.e., a positive or strong family history of cavernous malformations). Cavernomas can also develop in response to RADIATION THERAPY administered to the head/brain region in younger persons, including younger adults. The image below is from a young adult who had radiation to a brain AVM as a teenager, and developed a complex cavernous malformation some years later. This was removed by me surgically during awake craniotomy, but the hemosiderin (dark region) staining of the brain from the cavernoma is still evident.

In familial cases, a specific chromosome 7 gene abnormality has been demonstrated, and familial cavernous malformation has been reported to be more common in hispanic (especially Mexican-American) people. In familial cases, cavernous malformations are more commonly multiple (i.e., two or more cavernomas present at the time of diagnosis), and may certainly also involve the spinal cord. The 3-image panel below shows numerous cavernomas in the brain and one massive one in the spinal cord of a middle-aged man with a family history of the condition.

On chromosome 7, the specific two genes involved are refered to as CCM1 (band 7q11.2-q21; aka KRIT 1 because of its role in creating the KRIT 1 protein, or Krev interaction-trapped 1 protein), and CCM 2 (band 7p15-p13; controls production of the protein malcavernin). A third gene referred to as CCM 3 (on chromosome 3q) has been identified and is being investigated further.

Cavernomas may be asymptomatic, or may present with seizures (60%) or with progressive neurological impairment or “deficits” (50%). Some can present with hydrocephalus or raised intracranial pressure (headache, nausea, vomiting, visual disturbance, sleepiness) depending on their size and location. It is uncommon for cavernomas to cause sudden catastrophic or devastating neurological injury, but the progressive brain (or spinal cord) injury associated with cavernomas may be severely disabling as time goes on.

Sometimes, cavernous malformations slowly leak blood directly into the fluid compartments (subarachnoid space and ventricle chambers) of the brain. This can lead to build up of iron pigments on the brain surfaces (image, below). The condition is called superficial siderosis, and the iron pigments progressively damage nerve structures leading to symptoms such as deafness, tinnitus, loss of balance and coordination. Immediately below is an MRI image of such a patient treated by Dr Khurana. This patient with multiple cavernous malformations presented with symptomatic superficial siderosis from them. The image shows deposits of iron pigment (blackish brain surface regions on this T2 MRI sequence). The build up of this pigment can also cause blockage of fluid flow in the brain, leading to “hydrocephalus” that may need treatment too. 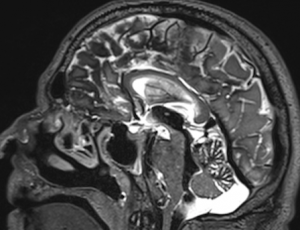 A rare complication of a spinal cord cavernous malformation can be the development of a syrinx (“syringomyelia“) in the spinal cord, from abnormal spinal fluid circulation caused by the presence of the cavernoma. Below is an example of a spinal cord syrinx (red arrows), and such abnormalities can be progressive and associated with unusual limb and torso sensory symptoms, in a “cape distribution”. The syrinx can resolve once the causative lesion has been surgically removed. 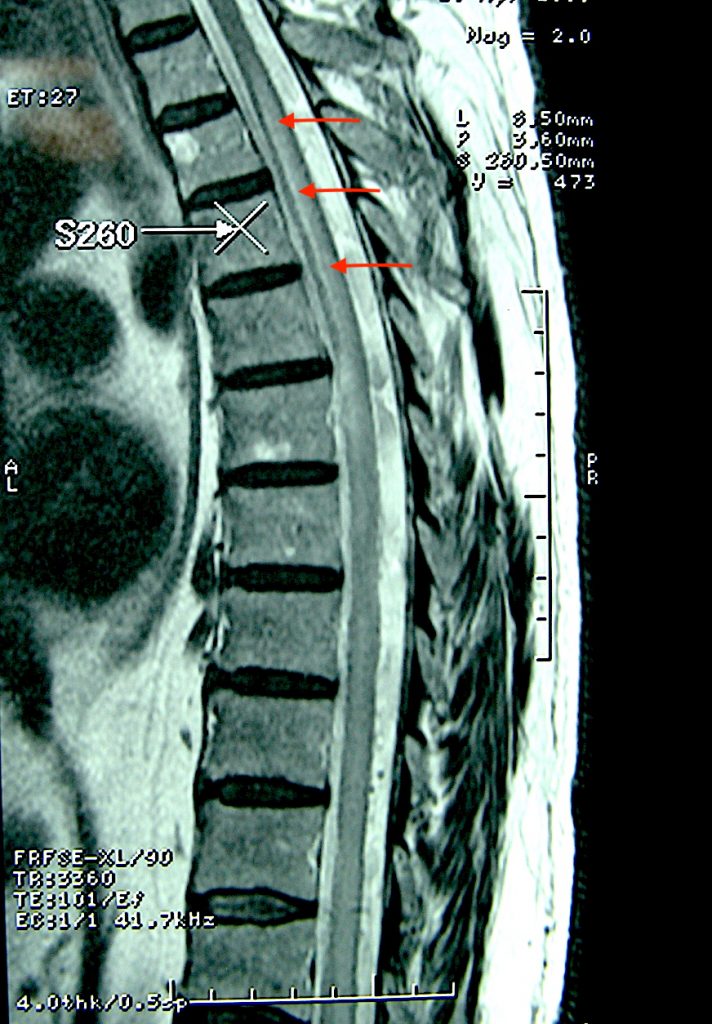 The risk of hemorrhage from a cavernoma is somewhere between 0.5-1% per year. It may be greater (or at least easier felt symptomatically) in cavernomas located in more “eloquent” brain such as the basal ganglia, thalamus, brainstem, and spinal cord. The rehemorrhage rate varies in the literature, but is probably somewhere between 4-10% per year (some reports indicate an even higher rate in the first year or two following the first diagnosed cavernoma hemorrhage). It has been reported that they can become more symptomatic during pregnancy.

The major complications are seizures and progressive neurological impairment, and the type of “deficit” varies according to the size and location of the cavernoma, and the extent and multiplicity/frequency of the hemorrhage(s). Superficial siderosis is also a complication (see above).

Cavernomas are detected best through MRI. They can enhance with contrast, but frequently do not. They are not detectable on a cerebral angiogram (i.e., are referred to as angiographically occult vascular malformations or AOVMs; however, an associated venous angioma may be detected on the angiogram!). The best two MRI sequences used to detect cavernomas are regular T2 (“popcorn” appearance; below left) and gradient echo (GRE; “India ink” blotch appearance; below right). A CT scan can also show a cavernoma (but in lower resolution compared with an MRI), and is a good surveillance tool for suspected acute haemorrhage. 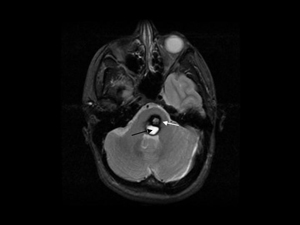 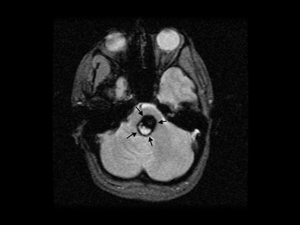 Note that in familial or multiple cavernoma patients, it is worthwhile screening the cervicothoracic spinal cord via MRI to exclude the presence of an occult cavernoma there.

Radiation (including stereotactic radiosurgery/SRS) can actually CAUSE cavernomas to form.

If a cavernoma is considered ‘inoperable’, feel free to discuss this further with Dr Khurana who has a special interest and expertise in cavernoma microsurgery using minimally invasive microsurgical techniques.