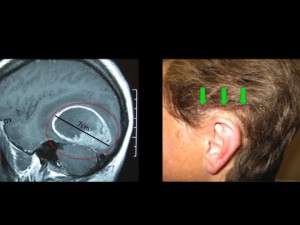 Panel above: This lady presented with a very large and aggressive primary brain cancer, a GBM. Her brain was swollen, and without surgery she would have lived a few weeks at most. I operated on her twice over a period of eight years, both surgeries were undertaken while she was awake, comfortable and interactive with us. Her survival from a GBM (eight years) was far more than the average survival for this tumour (1.5-2 years). Note the incision, which was photographed one week after her first surgery (green arrows). I use minimally invasive microsurgical techniques for my awakes.

This page has information about the following:

Please see our Multimedia page for information about the following:

What is an awake craniotomy?

Awake craniotomy is a neurosurgical art that uniquely combines training, advanced technology and microsurgical techniques and, perhaps most important of all, meticulous teamwork, preparation and communication. During some designated part of the operation, the patient is gently awoken by the team in order to be interactive with, and neurologically testable by, members of the team during the surgery. Via the techniques I use, typically:

Its key advantages are:

The part for which a patient is awoken is usually the “critical part” of the surgery, for example, involving removal of a brain tumour (e.g., glioma, or a brain cancer such as glioblastoma or metastasis) or cavernous malformation / cavernoma, where the tumour is located in a highly important brain location (i.e., “eloquent brain” aka “high-price brain real-estate”). The surgeon’s tumour resection is guided by a combination of electrophysiological testing (brain micro-electrical stimulation – see image below) and the real-time bed-side testing results from the patient (e.g., the patient’s language, vision, movement and/or touch-sensation) as tested during the surgery. 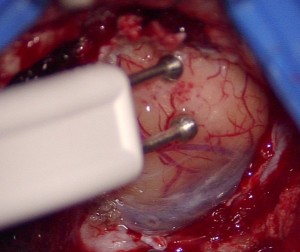 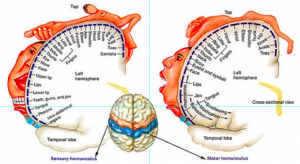 The key goals of awake craniotomy are to try to maximise the quantity of a patient’s life and minimise the risk of compromising their quality of life. The overall safety and efficacy of this procedure have been demonstrated in an evidence-based manner through cumulative experience with thousands of neurosurgery patients worldwide over decades.

Note: Awake craniotomy is NOT the same as “deep brain stimulation” (DBS). While DBS also involves the patient being awake and interactive during the procedure, a DBS procedure typically does NOT nvolve a craniotomy (skull bone-flap opening and subsequent replacement) or any microsurgical resection/surgical removal of a mass; rather DBS involves creation of one or more small burr holes in the skull, and subsequent electrode stimulation/ablation of small targetted areas of the brain through those burr holes.

Why is an awake craniotomy carried out? i.e., What is its main advantage?

Awake craniotomy is carried out or recommended to be carried out in SOME neurosurgical patients. Its purpose (i.e., the purpose of the patient being awake during the critical part of the operation) is to make the operation safer (i.e., reduce the likelihood of a neurological impairment or “deficit” in that particular patient). CERTAIN or “SELECT” PATIENTS with brain tumours or vascular malformations involving highly eloquent(i.e., highly functionally important) parts of the brain may benefit from an awake craniotomy because the neurosurgeon can be assured of the neurological progress of the patient in real-time.

The collage below (from an original study by Dr Khurana and colleagues, published in the British Journal of Neurosurgery in 2011) shows corresponding pre- and post-operative images from a series of awake craniotomies carried out by Dr Khurana for a variety of complex brain conditions including: 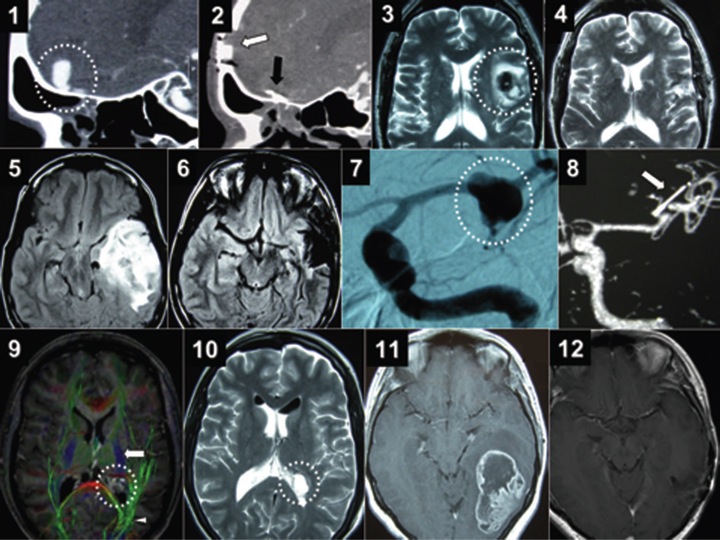 It is now well established that the MORE VOLUME a surgeon resects/removes of a brain cancer (glioblastoma multiforme, anaplastic astrocytoma, or a metastasis) or a “low grade” brain glioma (e.g., WHO grade II astrocytoma or oligodendroglioma), the better the prognosis is for that patient. However, the surgical goal must be for “maximal safe resection” – i.e., the surgeon should remove the most he or she can without permanently harming the patient.

In the setting of an awake craniotomy, a neurosurgeon can potentially be more aggressive with the condition (such as a brain cancer) knowing that the patient is awake and responsive and stays neurologically intact as the tumour removal or resection proceeds while the patient is simultaneously functionally tested by other members of the team.

Therefore, the key advantage of awake craniotomy over its traditional anaesthetised/fully asleep counterpart is that it can facilitate a surgeon reducing the risk of permanent neurological complications while increasing the extent/volume of the mass’ resection, through real-time neurological feedback (via micro-electrical stimulation of the brain and awake patient clinical testing) as the surgery proceeds.

Thus, many lesions that would otherwise be deemed ‘higher risk’ of permanent deficit or only partially resectable or “for biopsy only” owing to their location, may be more amenable to safer and more complete surgical resection using this approach.

Is an awake craniotomy the right choice for me?

Awake craniotomy/awake brain surgery may be very appropriate for you if:

Are there any disadvantages of awake craniotomy?

There are no significant downsides to this approach if all of the three criteria mentioned above are met. Any chance of a seizure, airway difficulty or pain/discomfort are reduced by the appropriate measures undertaken by a well-trained team.

Will I be in any pain during awake brain surgery? What can I expect?

In the hands of an experienced neurosurgical team, you will not be in any pain during awake brain surgery. Why? Because:

In the peer-reviewed and published experience of Dr Khurana’s awake craniotomy patients (see the next page), the vast majority of patients: experienced little or no pain/discomfort; were satisfied with their experience; and had no intraoperative problem or permanent complication from the surgery.

Approximately one-third of the patients had no recall of the surgery, while one-third had partial recall, and one-third had considerable recall, e.g., team members, conversation and testing — but not the craniotomy itself (as they were intentionally kept asleep for that part of the surgery).